I was a 20 year old freelance photographer living in Miami. My dream was to do special effects photography.

The only market for this work, at this time, was rock album covers and posters. I would photograph a band by conning my way back st age, develope the film that night and try and track the group down to show them the shots.

At that time, I also had a part-time job. I was working at a photo poster shop called Blow-Up Miami (could you imagine calling a company that today?) The owner and his manager were from Canada. The company made 30″ x 40″ instant photo posters , while you wait. It was an interesting process using Polaroid Type 55 film (4″x5″ Instant Black & White Positive/Negative Sheet Film) and stabilization prints. You would shoot the film, peel it apart, rinse the negative in sodium sulfide and print the negative while it was still wet.

Well, Blow-Up Miami was able to get a concession at a new rock club that had opened up a couple of miles up the road. The club was called Thee Image. They had a meditation room and everything. Psychedelic !!! I would work the concession with the boss. He would photograph people, couples or groups using the instant film. We would place the negatives in a bucket of sodium sulfide and I would hop on my motorcycle with the bucket, rush to the lab down the street and print the posters. Then shuttle the finished prints back to the club for delivery to the customers.

Anyway, that’s how I managed to be at Thee Image the night Led Zeppelin played. The week before, I had photographed Frank Zappa and The Mothers of Invention. Two weeks after, I would photograph Jim Morrison at his infamous Miami concert at Dinner Key Auditorium and testify at his trial.

It was Saturday, February 15, 1969, second night of a two night gig and last stop of Led Zeppelin’s 1st U.S. Tour. I had no idea who they were and had never heard their music. Can you imagine my shock when I heard them play? I haerd them live before ever hearing their record. I was blown away.

I got some great shots. The stage was small, at ground level with decent lighting. After the set, Zeppelin wandered over the the concession and I shot some pictures there, mostly John Bonham. He had come up to me and said he had the same camera, a Minolta, and was building a darkroom in his house, in England.

I went home that night and developed my film. The next morning, a Sunday, I went to their motel room and actually woke them up to show them the pictures. They loved them (except Robert Plant, he thought his cheekbones looked too big). They ordered a poster and some 8x10s.

A little over a year later, I was lucky enough to photograph them again, April 10, 1970 at the Miami Beach Convention Center. By then, they were very well known. It was a huge concert. I was able to get back stage. I used to freelance for an underground newspaper called the Daily Planet. I would use their name to get backstage. I spoke with John Bonham again and asked if he remembered me and if he had built his darkroom. Again, I got some great shots, especially of Page.

This was not to be the last time I saw them, however. I moved to Los Angeles in September 1972. In May of 1973, there was a young couple hitchhiking . I gave them a ride and made conversation. It turns out the young man’s name was David Levine (same as mine, but with a small “v”). What a coincidence. He was staying at the Hyatt House (made infamous in the movie Almost Famous). He invited me to come over and use the pool on the roof.

I went there the next day for a swim. Who shows up at the pool but Jimmy Page and Robert Plant, as well as the Bee Gees. There were groupies everywhere. Next thing you know, girls are getting thrown in the pool, along with pool furniture. It was wild. Every time a girl came out of the pool, she’d have one less article of clothing on. I heard later that Jimmy page actually hurt his finger and had to reschedule a concert, at the Forum. I was upset, at first, that i didn’t have my camera with me. But later, I realized that if I had started shooting, I probably would have ended up in the pool, camera and all.

So, that’s the story of these photographs.

See video of my VH1 interview about the Jim Morrison’s Miami Concert and Trial. 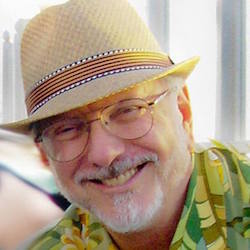 Over 50 years as a professional photographer.
25 plus years as a web developer.

I hope you enjoy my work.
David